Home Inspection a must before buying your dream home

Good vs Bad Drainage on Paving

There’s a huge risk in relying on a seller to disclose that a property has structural problems, as many consumers have discovered after moving in.

If the roof is found to be riddled with borers (insects that damage wood), or the patio floods whenever it rains, you can’t rely on the Consumer protection Act for help, says property attorney Nick Kassier of KwaZulu-Natal-based firm Shepstone & Wylie.

“For the CPA to apply to an immovable property transaction, the seller must regularly sell property or market themselves as sellers of property, and that’s not the case with a homeowner selling their primary residence.” One way to avoid that risk is to make it a condition of sale that the property be professionally inspected.

This service is offered by several companies, and although it can cost between R 3 000 and R4 000, if defects are revealed, it gives the buyer the ammunition to negotiate a lower price or walk away from the deal.

Sadly, Allison Tomlinson didn’t have an inspection done before signing to buy a townhouse in Hillcrest, Durban, last year. One of the conditions of the transfer was that the seller would complete a retaining wall and paving at the back of the house. Tomlinson took occupation of the property in March, and within a month she noticed that the new paving had “thick layers of algae and mould”, and was uneven, indicating that water was pooling below the surface.

The sellers insisted there was drainage, but when the area was dug up, none was found. “I sent follow-up e-mails, including photographs showing the damage, to be told by the seller that in the four years they had lived there, ‘there was never once an issue with drainage, hence there was nothing to disclose. You will just have to clean the pavers from time to time’.

“An hour later I e-mailed her the photographs of the pooling water from my attempts to clean, but she did not respond”, says Tomlinson. “The water took another three days to dry up – via evaporation”.

Reports by plumbing and paving companies confirm there was no drainage, and suggest that the paving was a DIY job by the previous owner – which was apparently confirmed by a neighbour who helped.

However, the neighbour did not want to get involved in the dispute. In a written statement, a maintenance worker at the complex said that before the sale, he was asked to clean the green algae off the pavers, and noted that the grass in that area was “extremely wet” even though it hadn’t rained.

Despite it appearing that a latent defect was not disclosed, the sellers have ignored Tomlinson’s request for a R22 000 refund for having the drainage fixed professionally. Michele Wilson, a director with Seeff Properties, the agents handling the sale, says the seller did not disclose any defects. The seller did not respond to an e-mail.

Kassier says: “In terms of common law the seller is still liable for latent defects. In this case, the buyer would be likely to have a claim for a reduced purchased price.

Tomlinson would have to show that, had she known of the defect, although she would have still purchased the property, she would not have paid the price that she did. “The problem with the common law remedies, however, is that without the protection of the CPA, the buyer is more exposed to the harsh effect of the voetstoots clause.

“The only way the buyer could get around that would be to show an element of fraud on the part of the seller; it would have to be shown that at the time the sale was concluded the seller was aware of the defect and purposefully refrained from informing the buyer so that the sale could continue.”

Because of the legal fees required, Tomlinson has decided not to take the matter any further.

Eric Bell, the CEO of Inspect-A-Home says: “It seems ridiculous that you can be protected by the CPA when buying a car, a toaster or a cellphone, but when it comes to a serious purchase like a house or apartment, the agents hide behind the voetstoots clause or ‘disclosure documents’.

“These disclosure documents are contrived to protect the seller and agent, as the preamble reads: ‘This is a true and honest evaluation of the property as I know it.’

“Obviously, if something is found after transfer by the buyer, the seller will just say that they were not aware of the problem.” 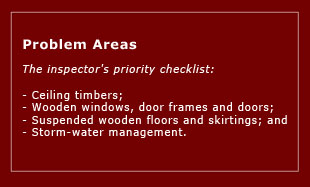 Agents “nearly always try to steer the buyer away from the inspection, saying that they have other offers which the seller may take as there are no conditions of sale with the other offers”.

But the inspection can save the buyer hundreds of thousands of rands, Bell says. He cites the example of a young couple with a baby who bought a house in Overport Durban. The agent told them an inspection was unnecessary. But when, three months later, the owner wanted to fit new gutters: “It was discovered that all the timber had collapsed from borer infestation and the seller had used lengths of pine to prop up the roof.

“We recommended immediate vacation of the premises and the entire roof, electrical piping, plumbing, ceilings had to be removed. The job took almost three months and cost more than R600 000.”

The couple had to extend their bond – and the agent took no responsibility for discouraging a professional inspection.

Ideally, it should be a legal requirement for all houses to be inspected before a sale, Bell says.