Moisture can decrease the integrity of walls 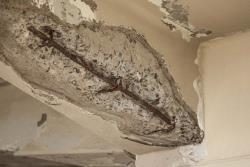 Areas with high moisture levels, especially along South Africa’s Coastline, with its relentless rainfall, sea spray and high winds, pose a threat to the structural integrity of buildings.

Spalling (the breaking off of cement, rock or stone into fragments) is as a result of water that reaches into the structures of buildings, causing surface peeling or flaking due to moisture in the concrete. This moisture, coupled with a high salt content that introduces chlorides into the concrete, pushes out from inside the structure while attacking the integrity of the steel reinforcing. As a result, corrosion breaks down the protective layer around the steel bars, weakening them and leading to the destruction of the building’s exterior structure.

Spalling is a common maintenance problem and is more prevalent in older buildings. Bodies corporate, building owners and property managers need to be aware of the dangers of spalling in high rainfall, wind and sea spray regions. Should you identify potential corrosion of cement, reinforcing, or cracks in a wall, ask for a building inspector to come and inspect it. If treated properly, the integrity of the building will remain unaffected.