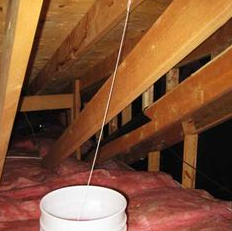 Roof cavity inspection findings: Recently we inspected a house in Westville where the roof cavity had over 30 paint tins and old buckets all collecting water from the roof leaking badly.

The owner had thrown sawdust 50mm thick over the entire ceiling to catch all the splashing. When I enquired about all the paint tins and sawdust in the roof, he told me that although he had been there for 30 years he had no idea how the paint tins and buckets had got up there.

My reply was I found it very hard to believe as one of the paint tins had a batch code of 2009 and was the same colour as his passage.

This is typical of the fraudulent disclosures some home owners make when they’re confronted with somebody buying their home.